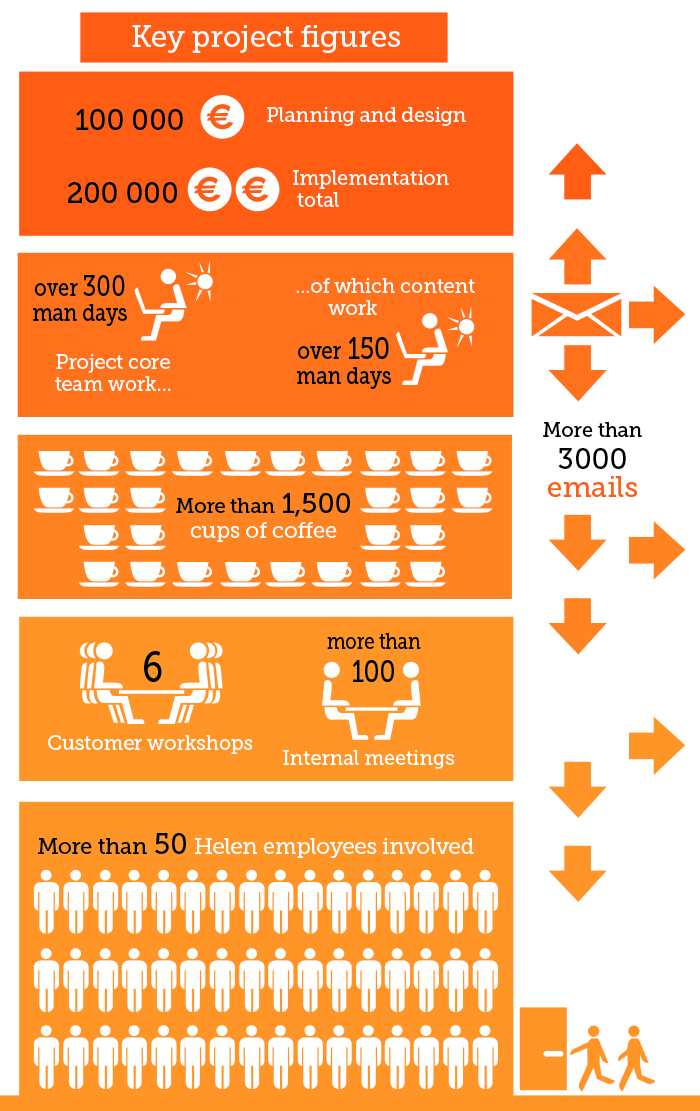 This is a story of how the helen.fi website was renewed. Jukka Helin, Development Manager, Helsingin Energia (energy utility), details the project from the RFP to implementation through to final publishing. The project started in the summer of 2012, and the new site went online in late 2013.

The helen.fi renewal as told by Jukka Helin

Helsingin Energia provides around 400,000 customers in all parts of Finland with electric power. In addition, it is our job to see to it that the capital Helsinki has enough heat and cooling, whatever ther weather or temperature.

An important business presented on the website, electricity sales, is highly competitive, and cost-cutting without compromising service quality is one of its most important goals. It was against this backdrop that we started the renewal of the helen.fi website, which had had its previous major update four years earlier. This is what the 18-month project looked like seen through the project manager’s eyes.

The old website did no longer provide adequate service to the demanding customers, neither did it provide sufficient opportunities for its administrators to create new content for different marketing and communication needs in an agile way. A strong consensus about this prevailed internally.

We decided to divide the project into two independent parts: design and concept creation on the one hand, and implementation on the other.

Requests for proposal to design agencies were sent in early June 2012, and an agreement was signed with Idean in August. This started an energetic three-month planning and design effort, during which many meetings were arranged with different types of customers while we internally deliberated on what we actually wanted from the new site. The internal focus was to treat the site as a kind of service provider. That’s why we continuously asked “What do we want the site to produce for us?” in our discussions. Formulating the question this way also avoided emotionally laden discussions on what color elements should the pages have and who should have how much visibility on the front page.

At Idean, the responsible person for user research and the project in general was Elina Uusimäki, and for user interface and interaction design Heikki Sarkkinen. The visualists were Leo Hakola and Mikko Lahti.

One of the main reasons for splitting the project into separate design and implementation projects was the need to buy time to make the choice on the technology platform. Helsingin Energia is predominantly a Microsoft user, and to unify administration, we had a bias toward creating all our online services on one platform, in our case SharePoint. For our public-facing web pages, we hadn’t had a proper CMS before, and listening to other administrators’ stories, we weren’t quite convinced whether SharePoint was the right platform choice for our public site.

Decision-making in a systems project is not always easy, so we decided to engage consultants to help us. North Patrol’s Sami Kalanen and Perttu Tolvanen were asked to evaluate our concept plan and give their own view of the costs of the implementation project using different systems. We had shortlisted Drupal, SharePoint and EPiServer as our potential implementation platforms.

Within our team we were later unanimous about the €10,000 paid to North Patrol being one of the best used amounts of money during the project. Their work ended all gut feeling based discussion on the strengths and weaknesses of the different platforms, and we were able to select the system based on our own priorities. We weighted easy maintenance, easy further development and lower cost the most. The winner was EPiServer 7.

We were now in November 2012. What we had so far was a concept regarded as excellent and widely validated by customers. In addition, we knew the system we wanted to use for implementation. What was left was finding the right team of EPiServer experts. At the time, we already knew that when the first version of the new website is up, the work is not yet finished. This is why we wanted the absolutely number one team to provide service to us during implementation and maintenance. Competitive bidding in the public sector, part of which Helsingin Energia is, often takes a long time. We sent RFPs to potential suppliers in the beginning of December, but the agreement wasn’t signed until April 2013. The neck-to-neck competition’s winner was Tieto.

Competitive bidding was a good idea, because we were (and still are) extremely satisfied with the implementation team of Tieto. Janne Kuusela (EPiServer architect), Timo Hiltunen (definition and concept creation), Arto Seppänen (HTML implementation), Dawid Madzia (coding), Grzegorz Jeremias (coding) and Sanna Bitter (project manager) did excellent work. The team completed the project exactly on budget and clearly before the deadline. Publication was planned at the end of November 2013, but we went online already in the beginning of November. We could have been able to go public even earlier, but the finishing touches on content creation made us postpone publication for a couple of weeks from the completion of the implementation project.

The “delay” in publication brings us to the third component of the project, which was not initially quite as well thought-through as design and implementation. Content. The online content or its maintenance—content strategy, as the buzzword goes—had not received much attention by early 2013. Fortunately for the project, we managed to internally arrange things so that Anu Peltonen of our own personnel was brought on board. She was tasked with the content creation and production for the entire website in three languages. I still consider it a small miracle that the content was ready and entered into the site ahead of the original schedule, very tight to begin with.

Why did we succeed?

From my experience, I can say this site renewal was a success. All metrics indicate we did a fabulous job as a team and can be proud of the end result. So why did we succeed even though there were more than enough pitfalls looming everywhere during our 18 months? In my opinion, the one and only answer is the people who were part of the project. First, the project owner and the steering group gave us their full acceptance to use our professional competency to get things right. We agreed from the beginning that the top criterium for the project is quality. In addition, the members of the project team had the full confidence of everyone else involved. All of the participants had clearly defined goals and responsibilities, as well as a lot of freedom to make the decisions they deemed the most appropriate within their area of responsibility. A particular effort was made to keep the discussions between all the different suppliers totally open. Thanks to the committed and skilled team, the project was completed under budget and ahead of schedule even though quality was its primary goal.

Of course, there is development work to do after the project, the time used for the project probably as number one. Actual work on the project took about 8 months of its 18-month duration. The rest of the time was spent on competitive bidding. Also, content planning should be included at an earlier stage.

In supporting roles, although important ones, were Quru, InPulse and Audipek. Quru was responsible for SEO mapping before and after publication, as well as the necessary redirects in connection with the publication. InPulse made a performance test to the almost-ready website. Audipek translated the content from Finnish into Swedish and English.

Now that we are some time past the publication, we can look at the results a bit more accurately. There was not much drama in connection with the publication. Even now, however, we see that the average time leading to a conversion on the site has dropped by more than 10 percent. In addition, immediate bounces have reduced by approximately 15 percent. Conversions in visits originated from Google have improved by 20-30%. The work, however, is only beginning, and this year will be used for improving service.