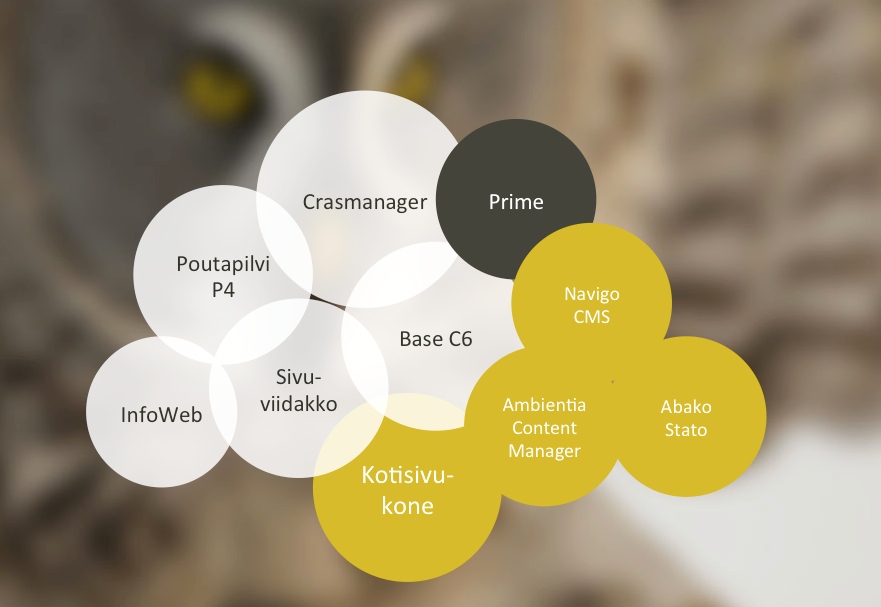 This article lists the most significant domestic content management systems in Finland in 2012. The list contains CMS systems which compete primarily for web projects in Finland in the 10,000-50,000 euro range. The order of the systems listed is based on an estimate of how commonly they are used as platforms for medium-sized projects.

The prices of domestic CMS products varies considerably, but licensing fees are usually a few thousand euros per year. A vendor may also bundle licensing fees with hosting and maintenance costs, so license fees are not separately listed.

Domestic vendors are generally very equally matched, since no one vendor has a significant share of the market. Most of the companies listed employ 10-30 people and have a few dozen active customers.

Crasmanager is a long-standing domestic CMS product from the Helsinki-based company Crasman. Crasmanager is a PHP-based CMS developed entirely in Finland. Crasmanager’s customers include both large corporations and small to medium sized businesses. Crasmanager is also resold and/or recommended by some Finnish advertising agencies and web design firms. Crasmanager’s special features include an emphasis on product data management and online annual reports. Crasman actively invests in development of its own product, even though it often has to compete with international products like Drupal or EPiServer. Crasman’s implementation projects typically cost a few tens of thousands of euros.

Prime is part of the Innofactor product family, in which the CMS is one part of integrated software. Prime is widely used particularly in the public sector and by 3rd sector organisations, the areas on which Innofactor focuses. Prime has numerous components designed to meet special needs in various fields. Prime is based on .Net framework. Innofactor, the developer of Prime, also implements projects on many Microsoft products, for example SharePoint. Prime’s special features include its companion products, for example event management and resource management solutions. Prime’s strength is in fact its broad range of features and Innofactor’s intention to actively develop the product “in many directions”. Prime cannot be considered a particularly specialised tool, but rather a multi-purpose system. Innofactor’s implementation projects typically cost a few tens of thousands of euros, but Innofactor also sometimes competes for very small projects (5,000-15,000 euros) as well as extremely large public sector projects (e.g. the City of Vantaa). Prime is also currently used by many large public sector customers, in some cases even for unusual applications of the software.

Sivuviidakko is a CMS from the software company Koodiviidakko in Oulu. The product is also actively sold in other areas, including Helsinki. Sivuviidakko is a newcomer to the domestic CMS market, but has gained a significant number of customers in a short time. Koodiviidakko actively invests particularly in reselling through advertising agencies. Koodiviidakko’s implementation projects typically cost from a few thousand to a few tens of thousands of euros. Sivuviidakko’s pricing model differs somewhat from its competitors, since it generally bases prices on the features included.

Kotisivukone is a domestic CMS tool purchased as a complete service. Kotisivukone is based on Java technology and the system is  managed entirely by Ideakone. The system is paid for monthly based on the features included. Advertising agencies and web design firms can only use the tool to change the appearance of pages, so no special features are available for sites created using Kotisivukone. It is very popular particularly as a tool for politicians’ websites, as many parties have agreements with Kotisivukone. Many small and medium sized businesses also use Kotisivukone for maintaining their own websites. Kotisivukone has thousands of customers in Finland. Kotisivukone is also suited for larger businesses, for example for short-term publishing of websites for seminars or campaigns. Kotisivukone enables putting up a fairly extensive website with an investment of only a few hundred euros.

Navigo CMS is Ch5 Finland Oy’s own CMS, which has a long history particularly in the public sector. Navigo has also gone through several different development versions. Navigo is now available in a traditional CMS version as well as a separate Navigo Portal version. Navigo CMS was developed entirely by Ch5 Finland. Navigo Portal is based on the open source LifeRay portal. Ch5 Finland Oy’s implementation projects typically cost from a few thousand to a few tens of thousands of euros.

Poutapilvi P4 is a CMS designed by the Poutapilvi company in Turku. The product is a PHP-based CMS, which is used specifically for publishing public sector websites. Poutapilvi only offers website design using its own P4 product. Poutapilvi’s CMS users also include a handful of large organisations (e.g. The Ministry of Employment and the Economy, Tikkurila), but generally websites implemented by Poutapilvi are significantly smaller, informational sites. Poutapilvi’s implementation projects typically cost from a few thousand to a few tens of thousands of euros.

InfoWeb is Tietotalo’s own CMS product, which has a long history particularly as a platform for tourism websites, and has implemented numerous different solutions for the tourist industry. Tietotalo also uses EPiServer and SharePoint in its website solutions. InfoWeb’s implementation projects typically cost from a few thousand to a few tens of thousands of euros. Tietotalo most likely recommends InfoWeb particularly to customers with a project implementation budget of less than 30,000 euros. For larger projects, EPiServer is probably recommended more often.

Ambientia’s own CMS product has been on the market for years. The system was previously a PHP-based CMS, but Ambientia redesigned the product in 2003 using Java technology. The current version is 7.0, and Ambientia is developing the system further. Currently Ambientia is actually best known as an integrator of Atlassian Confluence and Liferay in Finland. Implementation projects done using Ambientia Content Manager typically cost from a few thousand to a few tens of thousands of euros. Ambientia also probably recommends for example Liferay rather than its own Content Manager product for projects costing several tens of thousands of euros.

The Stato CMS from Abako in Tampere is a system with a long history which has been used for a number of large-scale implementations in Finland. Stato is a domestic CMS used particularly by large corporations. The system is not focused on websites alone, but also offers various portal and integration services. Stato differs from other domestic content management systems specifically because of its considered as a development platform, which in practice also means that wide-ranging websites implemented using Stato typically include tailored and specialised solutions for individual customers. In the past few years, Abako has won tenders including significant projects in the public sector.

SOLU Business Solution is a CMS from e21 in Helsinki. Implementation projects using SOLU typically cost from a few thousand to a few tens of thousands of euros. Numerically, only a few dozen web projects in Finland have been implemented using SOLU.

The CMS product from Verkkoasema in Oulu has already progressed to its fifth version. The system is a PHP-based domestic CMS. Verkkoasema’s implementation projects typically cost from a few thousand to a few tens of thousands of euros. According to Verkkoasema’s own report, they have done about 200 implementations in Finland.

HammerKit is a domestic CMS which is also a web developer’s toolkit. HammerKit’s goal is to make development of tailored websites as simple as possible even for non-programmers. HammerKit is suited for quick implementations, for example in communications, advertising and by website agencies. HammerKit’s special feature is that a skilled website designer can use the tool to do quite a lot without any programming experience. At the same time, use of HammerKit can be expanded if a user has sufficient programming skills. HammerKit does not yet have a very broad user base, but the product has been systematically developed for a number of years already. There are a few dozen active HammerKit users in Finland.

Hundreds of other small, domestic CMS products are also in use. Numerous advertising agencies and small IT firms still use their own tools to produce websites for their customers. Some of these companies have commercialised their products more visibly (e.g. ReallyCMS or Purple CMS), while others do not particularly advertise their use of their own product (e.g. Mainostoimisto Värikäs, Servia Finland). Tools are usually developed using the PHP programming language, and “beneath the surface” make use of various ready-made open source code components. Products are generally implemented for very specific customers, so in most cases discussion of “products” is perhaps somewhat exaggerated. The goal of agencies which use their own tools is primarily to speed up website projects, so for example smaller agencies’ products frequently do not include license fees at all.

Finland still has quite an active domestic CMS market, which can be seen as particularly beneficial for customers. Domestic products serve primarily to reign in pricing in competitive bidding, but also enable implementation of the high quality websites on a tight schedule. Being locked in to a single vendor’s product of course seems frightening to many customers, but if website projects are approached as two to three year investments, domestic products can offer extremely high quality at a reasonable price. Finland is not a particularly developed market for lightweight international CMS products, so the success of domestic products will most likely continue in the coming years. The greatest pressure is on vendors competing for larger projects with established international products (e.g. EPiServer or Drupal).